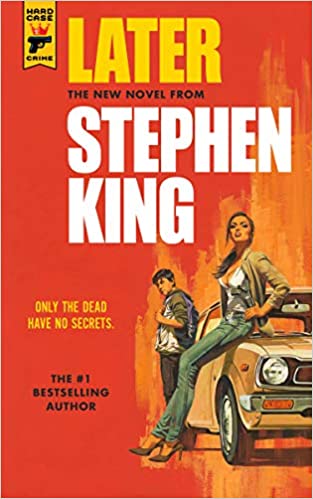 What pulls me into a book, keeps me up late into the night, turning pages? Glad you asked, but it’s not a simple answer. Plot, characters, setting, language, style, they absolutely all play a part. But more and more, the thing I find myself most drawn to, is voice. The sometimes shy, sometimes in your face, sometimes poetic and sometimes plain-spoken way an author chooses to narrate a story.

Some writers have a voice so idiosyncratic, so stylistically singular, that you can recognize them within just a few sentences. I’m thinking of writers as varied as Cormac McCarthy, R.A. Lafferty, Andrew Vachss, and Joe Lansdale. Then there are the chameleons. Writers who vary their voice to suit each book, who disappear into their characters.

For me, Stephen King is one of the very best at this, and Later, his newest novel, is a masterclass in voice.

Later is written in first person, as an adult looks back on events from his childhood that would forever transform his life. King is attempting a highwire act here, writing as an adult telling a story through the eyes of a child, and he pulls it off flawlessly. In lesser hands this could be a disaster, the voice bouncing back and forth and never settling into that perfect groove. King nails it. Jamie, the narrator of the story, is likable, smart, and engaging. He just feels right.

Jamie tells us more than once that this is a horror story, and he’s right, at least in part. Jamie has a special talent, a dark ability, that puts him in harm’s way and forces him into making decisions no child should have to make. He comes face to face with with death in ways that would be harrowing even for adults, let along a young kid. His innocence hangs in the balance. And because Later comes to us from the Hard Case Crime imprint, much like King’s earlier novel Joyland, there are morally compromised characters, law enforcement, and violent crime involved. There’s also a twisted family secret that caught me by surprise, and rocks the final quarter of the novel.

If that was all I had gotten from Later, I would have been satisfied, but King, as he often does, adds multiple layers to his story. Jamie’s mom is a literary agent, and King takes us into that world like the insider he is, and shows us how the sausage gets made. Later is set during the economic downturn, and King details the challenges it brought to the publishing world. I enjoyed those parts of the novel as much as the scary stuff. King has always been good at showing professionals being professional, doing the work. Jamie’s mom is a great character—tough, flinty, and damn good at her job. She’s no saint, in fact she’s one of those morally compromised characters I mentioned earlier, but her love for Jamie is unquestionable.

Later is not one of King’s epics. It’s a lean, propulsive crime novel, like all the Hard Case Crime novels. I absolutely loved it.