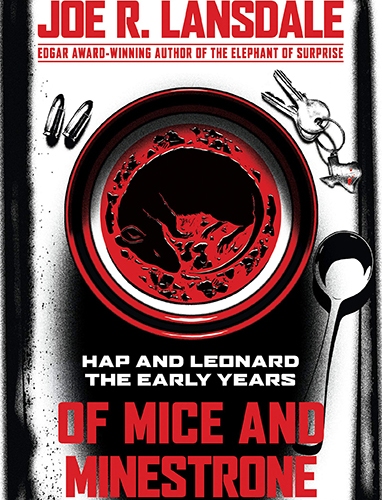 I discovered Joe Lansdale and Hap & Leonard at the same time, when I found a battered copy of Bad Chili at my local Half Price Books. I took it home and dove right in, finished it that evening, and headed back to Half Price Books the next day to pick up the other three or four Lansdale novels they had. In the many years since then, I’ve eagerly snapped up each new Hap & Leonard, while simultaneously working my way through Lansdale’s intimidatingly large back catalog. These days, when folks ask me who my favorite author is, I usually answer Lansdale. (On the days I don’t answer Lansdale, I answer Neil Gaiman, but I’d say that’s pretty good company to keep.)

Over the years we’ve gotten to know Hap Collins and Leonard Pine pretty well, watched them settle into middle age. Actually, settle is the wrong word. They’ve entered middle age kicking and screaming, cussing and fighting, and if they’ve reached some level of maturity, it’s been hard-won and doesn’t always stick. They may give a potentially violent situation some thought before engaging (Hap more than Leonard), but they aren’t afraid to fight the good fight if it’s the right thing to do. Hap and Leonard have both found love, and both have lost it.

Through the various novels and novellas in the series, we readers have been able to follow the twosome through just about their entire adult lives. The one thing missing, except for the occasional stories they would tell, was their early lives. That began to change in 2017 with Blood and Lemonade, a collection of loosely connected short stories that delved into Hap and Leonard’s early years. The book was a revelation, and included their very first meeting, a truly epic night that fits neatly into their wild and wooly mythology.

Now Lansdale has gifted us with Of Mice and Minestrone, subtitled Hap and Leonard The Early Years. If anything, this one is even better. Lansdale is one of our very best short story writers, and every story here is a gem. By seeing Hap and Leonard as teenage boys, we’re given an intimate glimpse of the men they will become. Of Mice and Minestrone features everything Lansdale is best at, including lovingly described hand to hand combat, real, flesh and blood characters, the best dialogue this side of Elmore Leonard, and sometimes scatological, always laugh out loud humor.

One more treat—Lansdale describes several meals in the course of the book, and his daughter Kasey Lansdale has contributed a bunch of recipes based on those meals. They all sound amazing, and I’m planning on trying several.

For fans of Joe Lansdale, and particularly fans of Hap and Leonard, Of Mice and Minestrone is a must read.

One thought on “BOOK REVIEW: OF MICE AND MINESTRONE BY JOE LANSDALE”