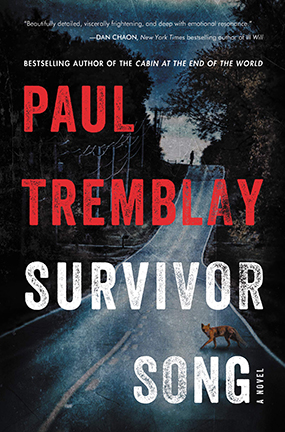 In the space of just a few years, Paul Tremblay has become one of my favorite horror authors. Check that, one of my favorite authors, period. After Head Full of Ghosts, Disappearance at Devil’s Rock, The Cabin at the End of the World, and his short story collection Growing Things and Other Stories, Tremblay is one of the few writers whose new work immediately goes to the top of my TBR pile.

Survivor Song might be his best novel yet, and that’s saying something.

The bones of the story are deceptively simple—a fast-acting, rabies-like virus is rampaging through Massachusetts, infecting mammals, humans included, at a terrifying rate. The main characters are two women, a pediatrician and her extremely pregnant friend. The friend has been bitten by an infected man, and may be infected herself. We follow the two of them over the course of just a few frantic hours as they navigate the chaos of a town overwhelmed by a catastrophic emergency.

What Tremblay does with this setup is breathtaking. Imagine being aboard a runaway freight train heading for a cliff, knowing with painful certainty that the end is coming but being powerless to stop it, knowing that people we have come to know are on that train and we can’t save them. That is what reading Survivor Song is like. The novel starts at breakneck speed and then accelerates, and keeps accelerating, twisting you up tighter and tighter. By the end of the book I felt wrung out, both physically and emotionally.

Given the thrill ride he’s built here, Tremblay doesn’t sacrifice nuance, he doesn’t sacrifice fully-realized, characters that you feel deeply for. There are meditations on the nature of friendship that are surprising in their depth. And even though the book deals with an event that is effecting a lot of people, it is sometimes startlingly intimate.

The science here is terrifying in its believability. With the current state of the world, Survivor Song feels not just plausible, but prescient. In that way it reminded me of Chuck Wendig’s Wanderers, one of my favorite reads of 2019. This novel could bookend that one.

One final thing. There is a chapter in Survivor Song, an interlude. Without giving anything away, I think this chapter features some of the finest writing Tremblay has done—it reaches a sustained emotional resonance, a horrible inevitability, that will rip your heart out. It just about broke me.

One thought on “BOOK REVIEW—SURVIVOR SONG BY PAUL TREMBLAY”