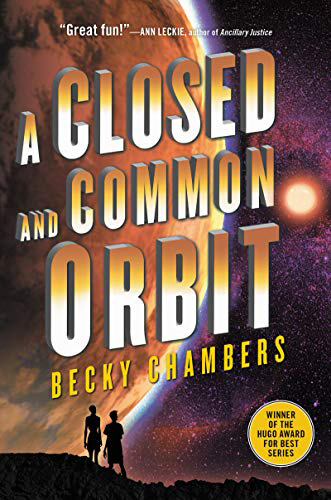 I read The Long Way to a Small, Angry Planet by Becky Chambers a couple of years ago. I went in blind, knowing only that it generally fell into the category of space opera, and that it had good word of mouth. That good word of mouth didn’t begin to prepare me for the delights of this novel. Chambers gave me a fully realized spacefaring future, then layered in quirky, fully realized characters, highly developed yet believable tech, a captivating story, and one more thing that catapulted it into the stratosphere: the best, most humane AI I have ever read.

As it turned out, The Long Way to a Small, Angry Planet was actually the first in the Wayfarer series. A Closed and Common Orbit, the second book in the series, is, if anything, even better. It follows a couple of characters from the first novel as they make their way through an adventure planet side, while simultaneously taking us through the harrowing childhood of one of those characters.

Chambers is firing on all cylinders here. The environments are richer and more complex, the stakes higher, the space opera aspects of the story a ridiculous amount of fun. We are introduced to a wider, more varied assortment of alien civilizations, and each one is fully realized.

The journey Chambers began with AI in The Long Way to a Small, Angry Planet is amplified here. She writes AI characters that are just as real, and just as humane, as the humans and alien lifeforms that populate the novel. A Closed and Common Orbit has a lot to say about the nature of sentience, about what makes someone who they are. Chambers writes with warmth and confidence, but also with a questioning intelligence, about family structures, friendships, and gender roles. All this, and a rollicking nail-biter of a story.

In case it’s not obvious, I loved this novel! The third book in the series, a stand-alone called Record of a Spaceborn Few, is already on my TBR stack.